Kristen Leanne Makes Us Want to Invest in Mustard-Yellow Everything 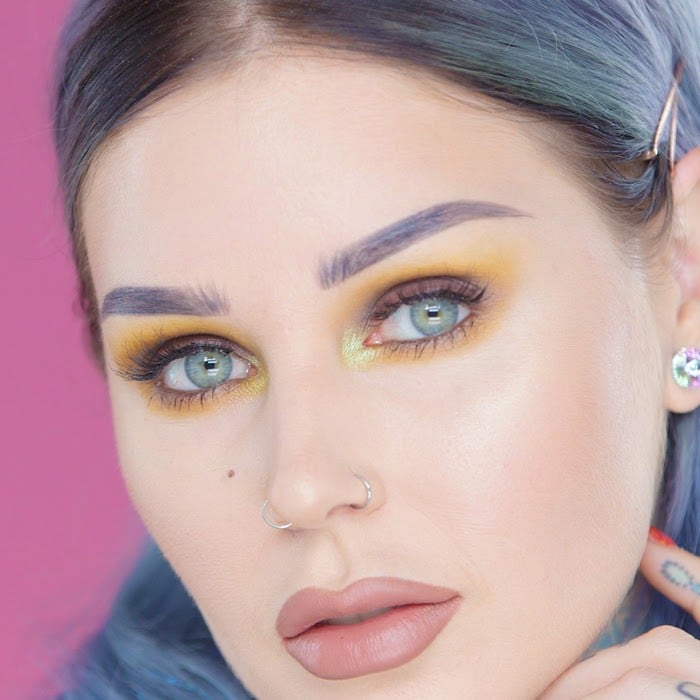 When Urban Decay announced its first influencer collaboration with Kristen Leanne, we knew this wouldn't be a typical offering. Kristen's unique beauty philosophy and look was a wise pick for the brand; it prides itself on being the brand with "an edge," which Kristen certainly isn't lacking.

Kristen, 29, started creating makeup tutorials in 2014. She's known as one of the top cruelty-free advocates in the online beauty community and started Arctic Fox, a vegan and cruelty-free hair color line, which she uses frequently and features in her videos. (Her husband, Ryan Morgan, who cofounded the brand, is also known for his colorful hair and beard.)

"I always knew when I was going to do a collaboration, I wanted it to be really authentic," said Leanne. "I always say if I were a makeup brand, I would be Urban Decay. So I think that's what sets it apart for me. I was really interested in having the shades I wanted. Urban Decay is amazing at packaging. So the inside of each of the palettes is so different than anything they've created prior to this. The fact that it's an entire collection separates it for me, too."

The line includes three palettes, three Vice lipsticks, a liquid lipstick duo, a cement shade of Vice liquid lipstick, and a mustard-yellow eye shadow single. All the shades featured aren't what you'd typically see from a launch: the lipsticks have shades of purple, one of the palettes features a matte orange shade appropriately named "Tajin," and, as we mentioned, one of the liquid lips is a deep gray. But for those who are less experimental, there's a gorgeous neutral eye shadow palette and a highlighter trio that cater to every skin tone, and several of the lip offerings include shades of taupe and mauve.

"I fought for all of them. But Pulse (the cool gray liquid lipstick) and S.G.H. (the mustard-yellow eye shadow single) were two shades I could not let go of. We were trying to figure out a spot of them, and it wasn't working with the neutral palette or the Kaleidoscope Dream palette, so they let me do it as a single, an exclusive, which was really exciting because I think it's such a unique shade - it's so me, and so is Pulse."

We asked Kristen to show us how she uses S.G.H., and she makes a strong case for a very hard to pull off shade. "There are no rules," said Kristen. "My intention is to inspire people to do what makes them feel great. I grew up getting made fun of a lot in high school and middle school, and I was never really good enough for the people that made fun of me. I tried to fit in, and they still made fun of me. Whatever makes you feel good inside, go with that."

Check out Kristen's tutorial on how to get the look, and pick up her Urban Decay collaboration in stores now.